How to host a website on your own PC 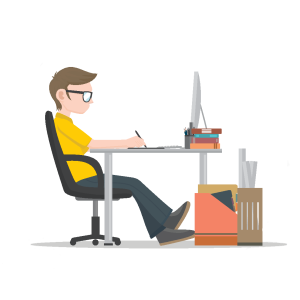 Meet Damian. A beginner-level blogger, who is sick of Tumblr and wants a personal website. Except Damian is greedy. So greedy, that he doesn’t want to pay $3 per month for hosting.

One time, someone told Damian, that he can host a website on his own PC. And not just a website — he can have a whole dedicated server, which will work not only the blog, but also the online store, where Damian will sell T-shirts, hats and other merch.

In this article, we will tell you a story of how Damian was making a hosting for himself. And also about why it was not the smartest move on his part.

Damian can turn a PC into a hosting in about an hour. But firast, he needs to do some preparations.

Damian does not own a stationary PC — he only has a laptop he uses to browse Facebook and Instagram. But he also understands, that it is not a good idea to host a website on an old laptop he constantly drags around.

So Damian goes to http://pcpartpicker.com and crying over every penny assembles a PC for himself. The end result is a dual-core Pentium G4560 with 4 GB RAM, which ends up costing $250.

When Damian sees prices on Windows, he nearly faints. But he doesn’t know anything about Linux, and he is not ready to make such an aquaintance. Ho he decides not to activate Windows, promising himself to buy a license later — when he gets at least some money out of his blog.

Damian needs good Internet connection — how else would he service the crowds of readers with fresh new opinions? And current 10 Mbit/s manage to lag even when he watches high quality video on Youtube.

Sighing wistfully, Damian visits his local providers, looking for cheap 100 Mbit/s. Yet once they find out why he wants such a channel, all providers point to User Agreement and offer special prices for hosting — around 5 times more expensive than normal. Other don’t allow private hosting at all. Finally, Damian finds a new provider that is willing to put hist hosting online for $35 per month — but only for awhile.

Damian also buys a dedicated IP. This costs him another $2 per month.

After he had assembled the PC and plugged in the cheap display he found somewhere, Damian finally gets to work. After reading some forums, he finds out — in order for his hosting to work with modern CMSs, he needs some special software — Apache, PHP, MySQL, PHPMyAdmin etc.

He could download and install them one by one — but that takes awhile, is complicated and can lead to version conflict. Fortunately, someone shows him a package of apps, which will install and setup everything for Damian — Wampserver.

It takes about half-an-hour for Damian to figure out how to properly install Wampserver, register the domain names and connect them to it, and finally get to WordPress installation screen.

Now, let’s figure out, how much Damian had managed to save up:

This means, that this extremely weak dedicated server cost Damian around $70 per month, after $250 of initial expense.

All this time, Unihost offers an i7 with 32 GB RAM for the same price, without any aforementioned issues. And Damin could get a 4GB RAM Pentium for only $40 per month, or even host a single website only for $6 per month. Which means, that Damian has cheated himself out of $30 per month and has earned some issues with the law.

104 days later, Damian stopped being an idiot and was offered a starting level job at the generous internet provider — mostly due to the experience he acquired managing the hosting on his own for three months. Since it was time to go to college, he declined — and five years after that, here he is, writing this story with minor contemporary changes. Damian would not change a thing in his experience, but also would not recommend anyone doing this. Unless they want to find out how hosting really works.

Do you have any questions left? Or maybe you want to share your own story of turning a PC into a hosting? Leave comments and subscribe to Unihost blog newsletter in order not to miss new interesting articles.

Rate the article:
[Total: 559    Average: 2/5]
Liked that? We’ve done our best!
Subscribe to get useful articles and updates.

5 reasons to immediately switch to VPS

You need to create custom error pages. Here’s why.

Switching web hostings: is it worth it?